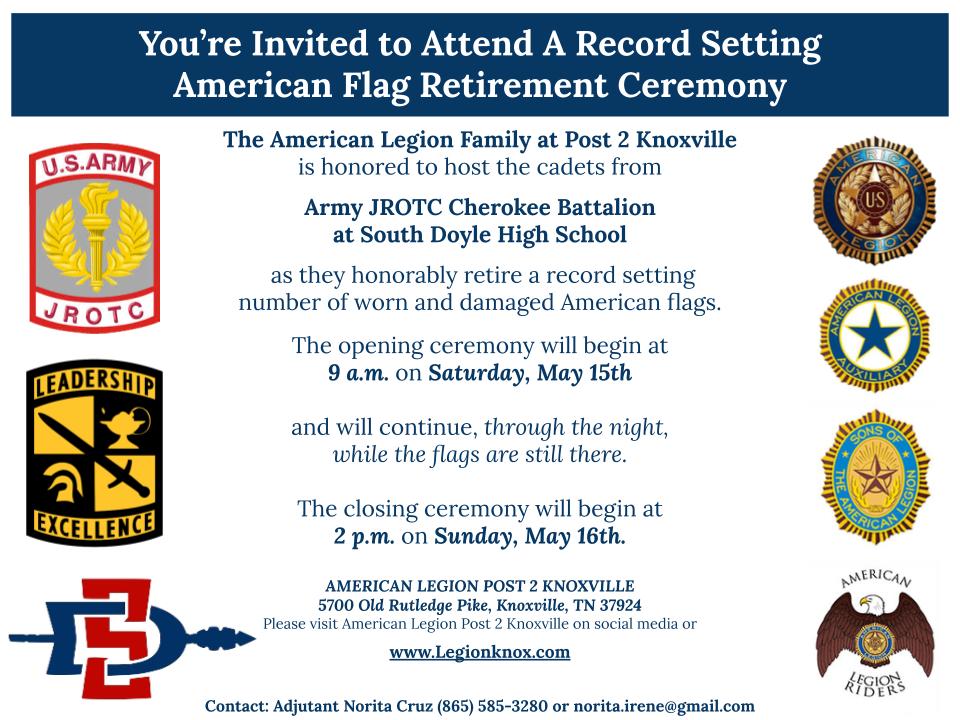 The South Doyle High School JROTC cadets will attempt setting a self-proclaimed record with the largest number of American Flags to be retired at one time.

The Cherokee Battalion began this Service Learning Project after assisting with a similar flag retirement ceremony at American Legion Post 2 Knoxville, in 2018 where 508 flags were retired.  The cadets initially began collecting flags and set a goal of retiring 1,000 flags, following their 2019 JROTC Program of Accreditation inspection. The community quickly stepped in and the cadets have received over 4,000 flags. They are on track to surpass their goal!

The cadets have focused on flag history, protocol, customs, and etiquette, including the United States Flag Code, Title 4, Section 8k:

The flag, when it is in such condition that it is no longer a fitting emblem for display, should be destroyed in a dignified way, preferably by burning.

We invite members of the public to bring their worn or damaged American flags to the post, where they will be properly folded and honorably retired. The opening ceremony will begin Saturday morning, and will continue through the night, while the flags are still there.

American Legion Post 2 is proud to announce they have purchased property, located at 5700 Old Rutledge Pike in Knoxville, to serve as site of the new Post 2 home. This new building will allow the Post to continue serving the community and will provide meeting space not only for Post 2, but also for other veteran nonprofit groups and youth organizations such as the Young Marines, the Sea Cadets, JROTC Units from local high schools, and local Boy Scouts troops.

For information on how you can support this effort either with a financial contribution, or an in-kind gift to the Legion, please contact Commander Michael Testerman.